Talk is Biotech! with Eric Merle 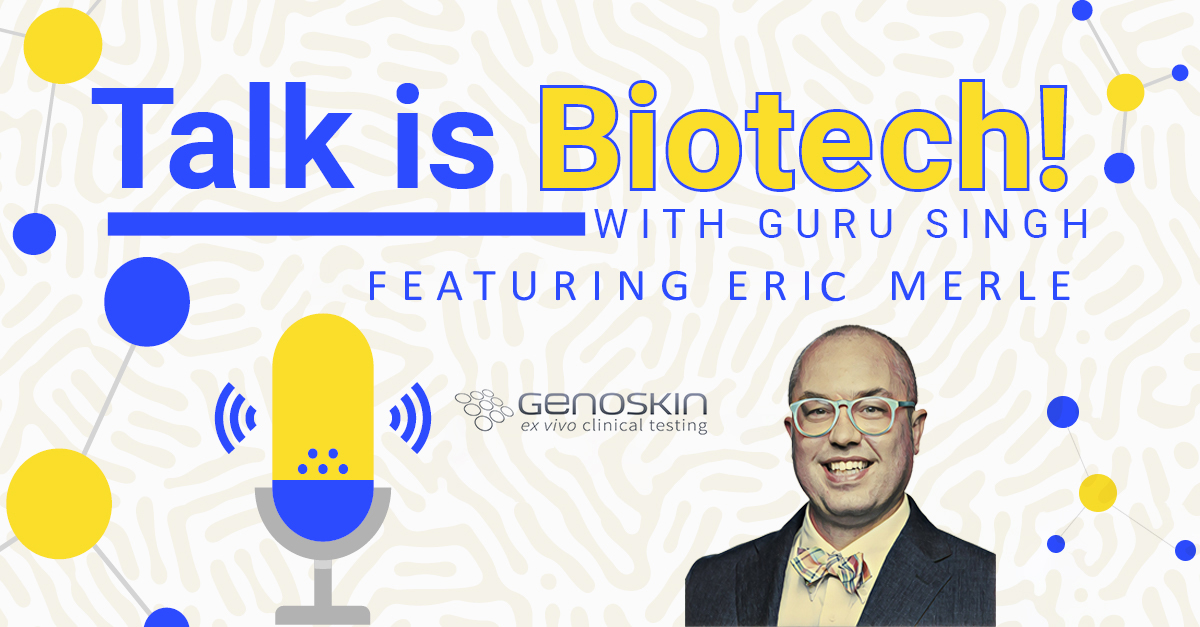 Guru sat down with Eric Merle, Chief Business Innovation Officer at Genoskin, to talk about how Genoskin is changing the game for research using ex vivo models, the decline of animal testing, what it means to be the "first-in-human" platform, and much more.

Developing  transformative technologies based on living immunocompetent and injectable  skin

Genoskin is a decade old company that has evolved considerably in the past three years. It has developed transformative technologies based on living immunocompetent and injectable skin that accelerates primary data generation to de-risk both therapeutic and non-therapeutic development.

"Genoskin is a very active R&D company. In the past three years, we've launched a platform connected to microfluidics called flow skin in which you reproduce a circulation that can be used for Pharmacokinetic Pharmacodynamic (PKPD) Analysis.

We launched a vaccine platform so we can see the first steps of vaccination within the tissue as well and an injection site reaction platform, where we do an intense characterization of the crosstalk and the presence, proliferation, and activity of immune cells within the tissue." - Eric tells us.

Advantages of using Genoskin's platform over testing in clinics

"Another big advantage of our platform that you will never be able to do in the clinic is that you can perform multiple different tests within the same donor." Eric tells us.

Eric firmly believes that the near future of drug development won't pose any risk to humans and will be a final validation once the drug is ready. With the rapid advances in technology, we are getting closer to the reality where we can generate data-driven proof that a drug is safe to be used on a human, works on a human, and as a final check was validated by testing on a human without any risks.

Animal testing in the cosmetics industry is on the decline

With increasing global restrictions on animal testing, the industry has started to decline. As Eric tells us, this decline began with the cosmetic industry in Europe, and the pressure to stop animal testing extended to Asia and even some states US including California, which is a big blow to the industry as California is the eighth biggest economy in the world.

"Not only do I believe that we can, but that we are morally obliged to do so. Quickly developing better drugs is important, but maintaining a safe and ethical way to do that is important as well."

"It is our responsibility as members of the biotech and pharma industry to pave a better way forward for drug development," Eric said.

Genoskin on being a  true "first-in-human" platform

Currently, Genoskin serves as a bridge between animal testing and testing directly on humans. As regulations on animal testing continue to become more stringent, countries are looking for alternatives. Genoskin has the potential to become a leader with its innovative technology. Eric compares Genoskin to being a true "first-in-human". First-in-human is a type of clinical trial when a new drug, procedure, or treatment is tested in humans for the first time and you can generate the same data using Genoskin's platforms.

Eric tells us that the future of Genoksin is to add to their current catalog of innovative products and to build a family of platforms that helps researchers to de-risk their research as much as possible moving into the clinical phase.