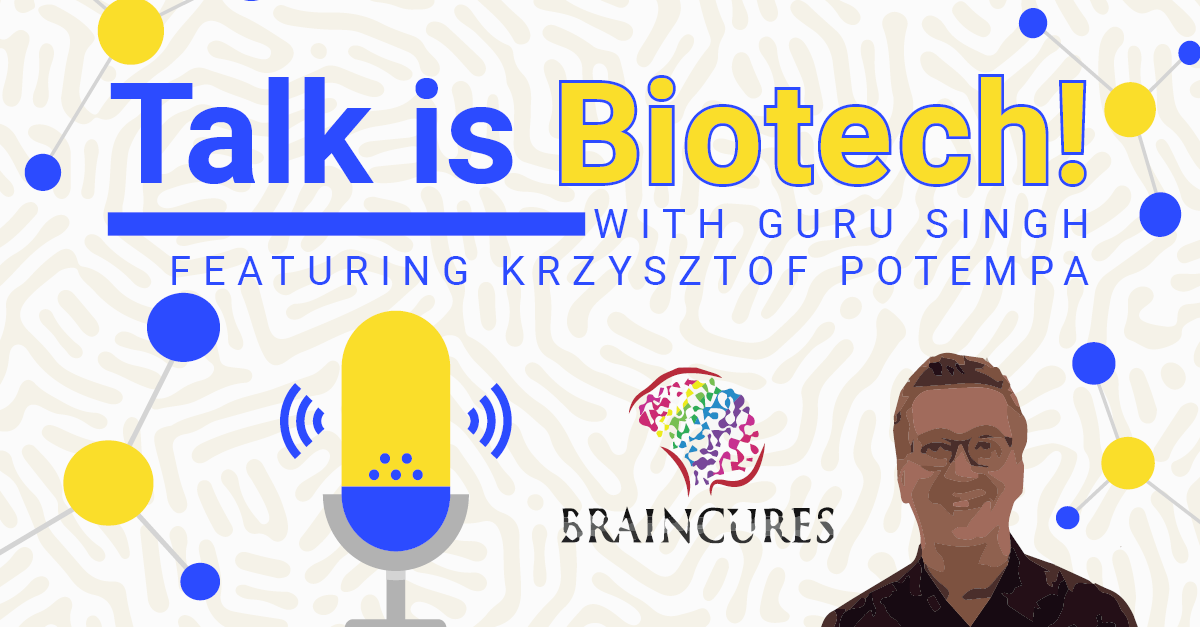 In the first episode of Talk is Biotech!, I sat down with the Braincures CEO Krzysztof Potempa. Krzystof shares how he went from neuroscientist to bioentrepreneur and talks about his quest to solve the problem that affects one in every six people worldwide - neurological diseases. He also shares some nuggets of wisdom that aspiring bioentrepreneurs may find helpful.

Story of a bioentrepreneur to-be

Krzystof was born in a family of scientists. Following his father's footsteps, who is a biochemist, he went to the University of Georgia to study biochemistry & molecular biology. He later went to get a Ph.D. from Pierre and Marie Curie University, where he studied functional genomics of synaptic plasticity. He discovered how learning and memorizing occurs in healthy animals' brains and how they can be translated into drug discovery and development (R&D) for neurological disorders. Soon after finishing his Ph.D., he joined Lundbeck Pharma, a Danish neuroscience company, as a bioinformatician. However, as the popularity of next-generation sequencing (NGS) skyrocketed for genomics, his microarray data analysis experience became less popular, resulting in his departure from the company. Luckily, he got an opportunity to join a leading immunologist at the Francis Crick Institute in London, who relied on microarray data for understanding immunoregulation. "I was a bioinformatician who became redundant because the microarray data I used to work on was no longer popular, and the next-gen sequencing was more fashionable," said Krzystof.

The Valley of Death in neuro drug development

Drugs for neurological diseases are infamous as they keep failing in clinical trials. Diseases like Alzheimer's have become a veritable graveyard for a large number of promising drugs. The cost to develop neuro drugs is almost 6 billion dollars. When my colleague Peter Ball looked at Alzheimer's drug research, he said that it is like doing the same thing over and over again, hoping for a different outcome, which is, of course, how Einstein defined insanity. Krzysztof says that "One of the reasons why developing drugs for neurological diseases is up to 2-3 times more expensive than developing drugs for other diseases is because our understanding of the fundamental biology of our nervous system is still lacking."

Krzystof recommends three approaches to address the "valley of death" in neuro.

According to Krysztof, "We need to leverage biology-first approach, like Braincures, to understand better how existing or novel drugs could be repurposed or made."

He goes on to say that "We have used a systems biology approach to unravel the molecular map behind learning and memory. This biological intelligence powers our proprietary algorithms to de-risk and accelerate drug discovery, repurposing, and biomarker-based patient stratification."

"We help companies choose repositioning opportunities that have a very high likelihood of success with the right biomarkers. We run what we call a virtual screening approach. We often also leverage Broad Institute's L1000 resource, an in vitro resource, but we have in vivo data from these microarrays that I did back in 2004. And then, there are datasets that we leverage to predict the drug's potential then. You could say it's a virtual phenotypic approach that has both in vivo and in vitro data. For Alzheimer's disease research, we virtually screened 55 drugs, obtained L1000 signatures, and used Braincures' proprietary algorithm to filter out candidates with a poor likelihood of success. And identified 20 drug candidates that have a profile that's better than the current Memantine that used to treat Alzheimer's disease."

There are tens of thousands of research service providers that include CROs, academic core labs, bioinformatics, and innovative product providers. Biotech companies must take advantage of external innovations and leverage others' inventions to leapfrog the development of neurological drugs instead of reinventing the wheel.

Krzystof has been a practitioner of the "fail fast" mantra and recommends this to all aspiring bioentrepreneurs. "During my Ph.D., we discovered molecular mechanisms for how memory happens that could then be translated into treatments for neurological disorders such as Alzheimer's disease, depression, addiction, treatments, pain therapeutics, and Parkinson's. We found that we've figured out a novel mechanism. But we tried to publish it, and after, let's say, three major rejections, I said, well, it's time to learn from these rejections and start biotech. That's how I started my company, says the Braincures CEO.

"Take rejections as opportunities. Three major rejections motivated him to become a bioentrepreneur."

Leaving all safety nets behind and starting a business is not for the faint of heart. Krzystof believes being confident in your abilities and having a passion for following your dreams are essential to becoming a successful bioentrepreneur.

Network more and connect with other dreamers

"There are good people out there; you're going to need to network with people in the industry. And I also think that bioentrepreneurs need to look for accelerators like Y Combinator and Techstars because that's where you meet dreamers who make things happen. This helps see your dream more clearly, then make a plan and deliver on it."

Motivation to start a biotech company

The worsening state of neurological research was one of Krzysztof's turning points in his decision to start his own company. "When my contract at Crick terminated in 2016, I looked at what the neuroscience field still looked like. And it was clear that it was getting worse and worse. Companies were backing out, and drug failure rates, particularly for Alzheimer's drug R&D were going through the roof. Hardly one in a 100 Alzheimer's drug candidates move successfully from drug discovery to the clinic. The success rate is about 0.4%. Unsurprisingly, the cost of developing Alzheimer's drugs is projected to be $6B rather than the $2.6B."

Ph.D. work and Rising from Rejection

"During my Ph.D., we discovered molecular mechanisms for how memory happens that could be then translated into treatments for neurological disorders, from Alzheimer's disease, depression, addiction, treatments, pain therapeutics, and Parkinson's. When I tried to publish, it got rejected three times in a row, so I said, well, maybe it’s time to learn from these rejections and start a biotech company."

Inspiring experience at the Genesis Conference

"I went to the Genesis Conference organized by One Nucleus, a life science network in London. At the conference, I heard an inspiring talk from a leader at AstraZeneca about the 5R Framework."

"The talk inspired me to create a biology-powered algorithm that can help drug companies to focus their resources only on the candidates that are most likely to be successful."

By leveraging biology-powered AI models, biotech companies can potentially save a great deal of time and money by cutting down on lab experiments. "Braincures' proprietary algorithm aims to shorten the preclinical phase of drug R&D by as many as four years." Combining this data-driven and in-silico approach with research outsourcing to CROs can help create cures for major diseases faster and generate billions of dollars for biotech companies from garages and dorm rooms alike.

Want to be a speaker in the next Talk is Biotech episode? Apply here. 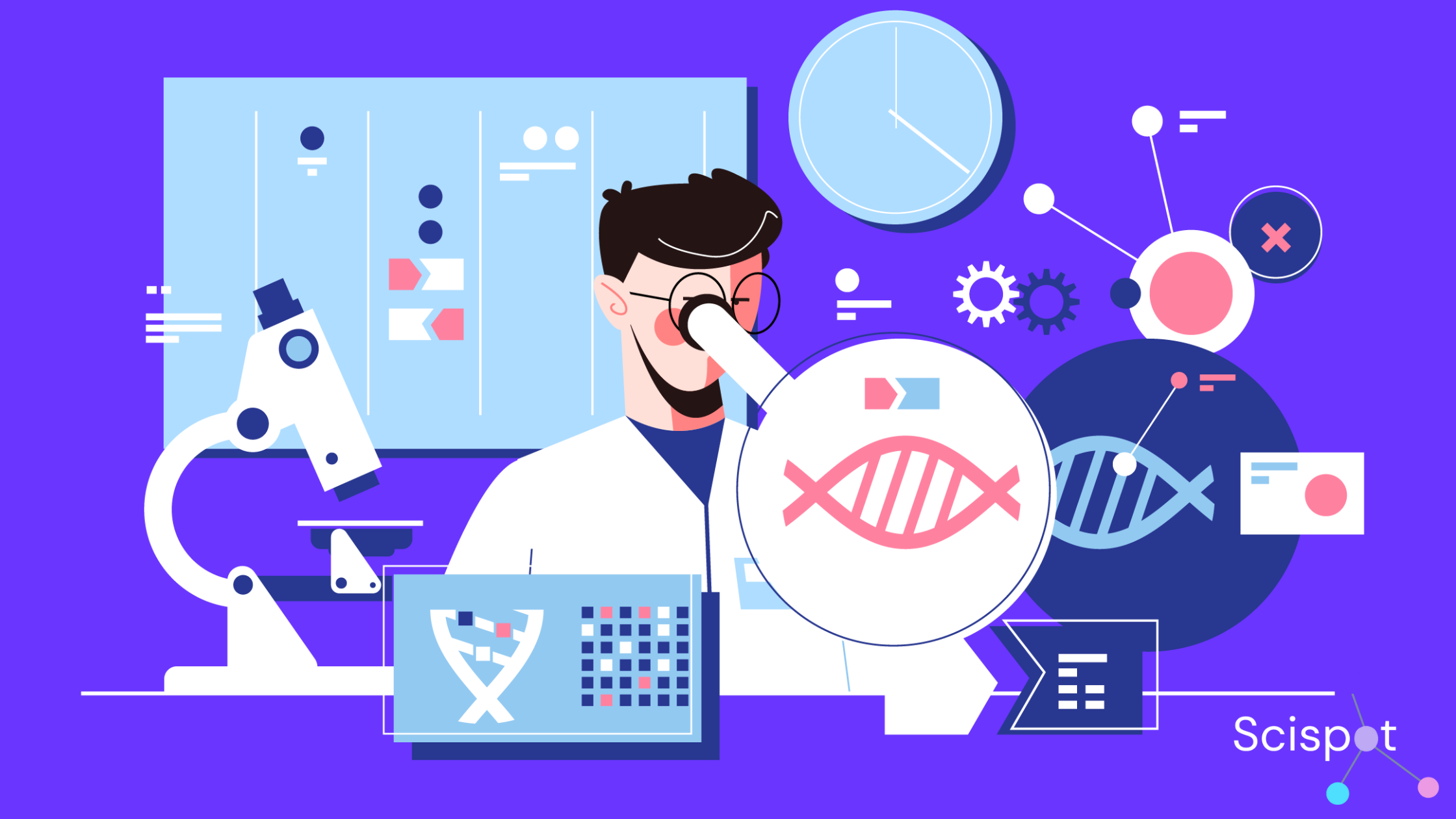 In recent years, the state of Delaware is becoming a hub for biotech startups and scaleups. From companies working on new treatments for cancer to those developing innovative technologies for the food and agriculture industry, these bio-businesses are making a big impact in the First State. To help you keep up with the latest in Delaware biotech, we’ve compiled a list of our top 15 biostartups and scaleups picks. These companies are doing cutting-edge work in a variety of areas, including biopharma, medical devices, and diagnostics. 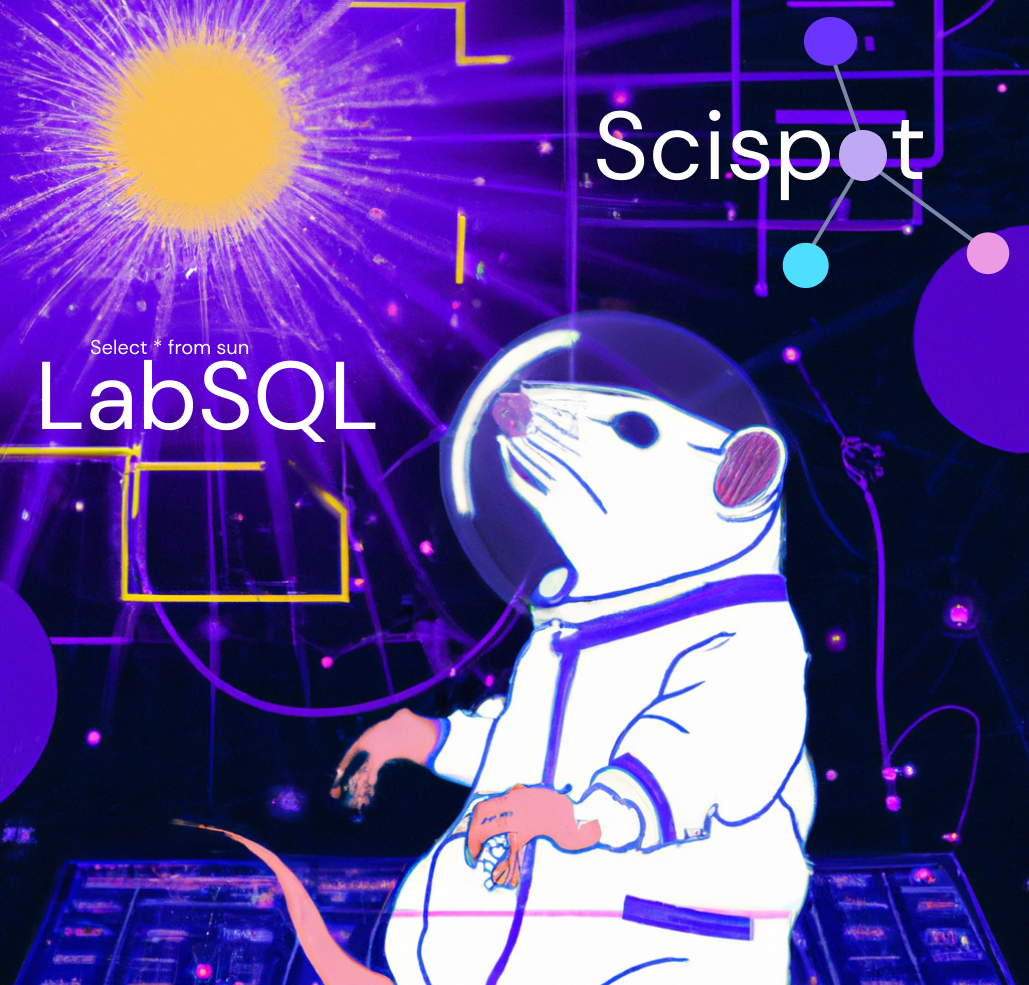 LabSQL Allows Biostartups to Build Their Own Customized, Adaptable LIMS

Biostartups are adaptable, fast growing, and always changing as they race to create new products or technology to improve or save human lives. Startups need to be agile to survive. Therefore, every biostartup has its own workflows and lab data management needs. Yet, most lab information management systems (LIMS) and electronic notebooks (ELNs) are hard-coded with rigid templates that scientists cannot customize. Scientists have to adapt to their LIMS when it should be the opposite. 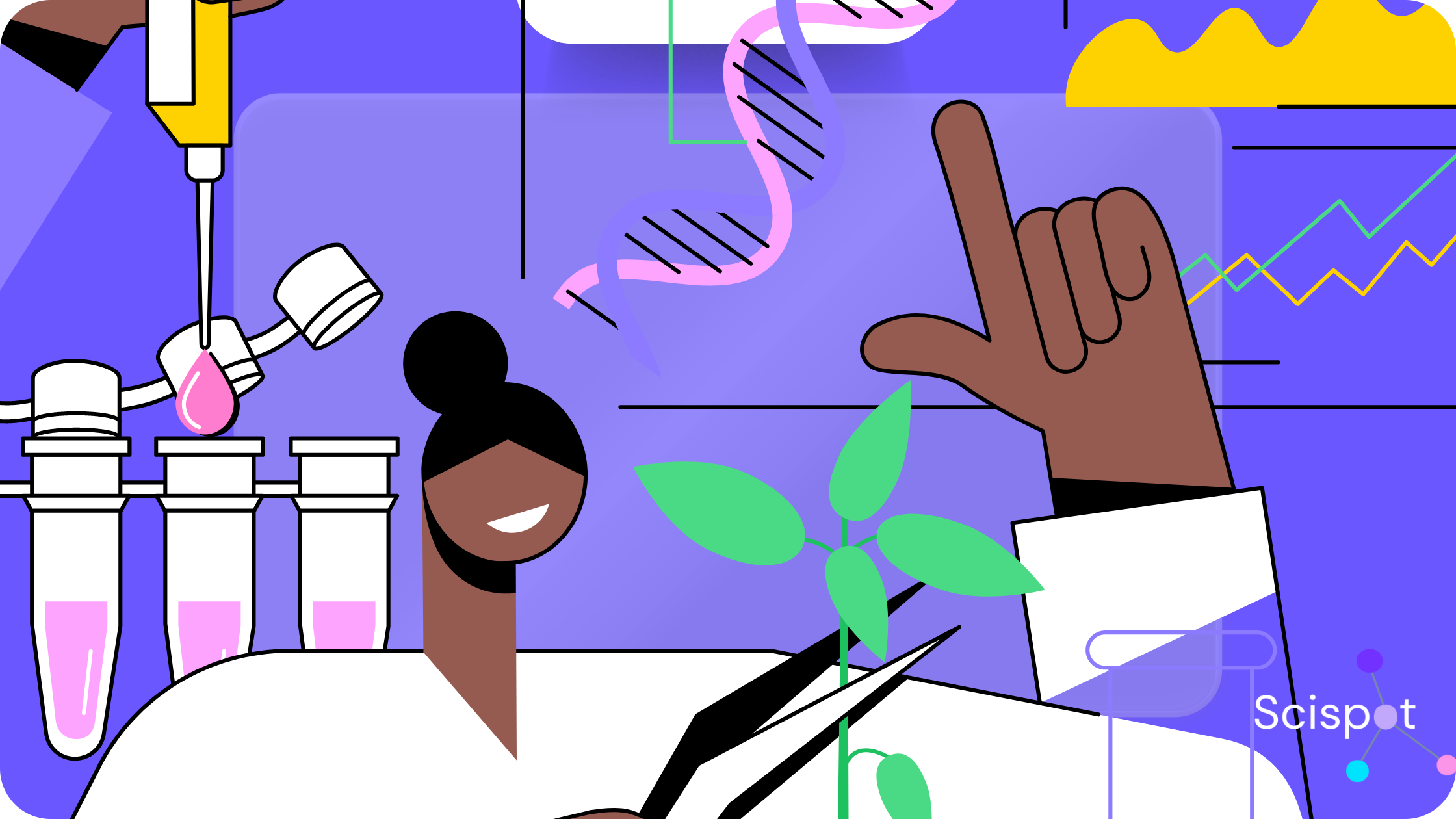