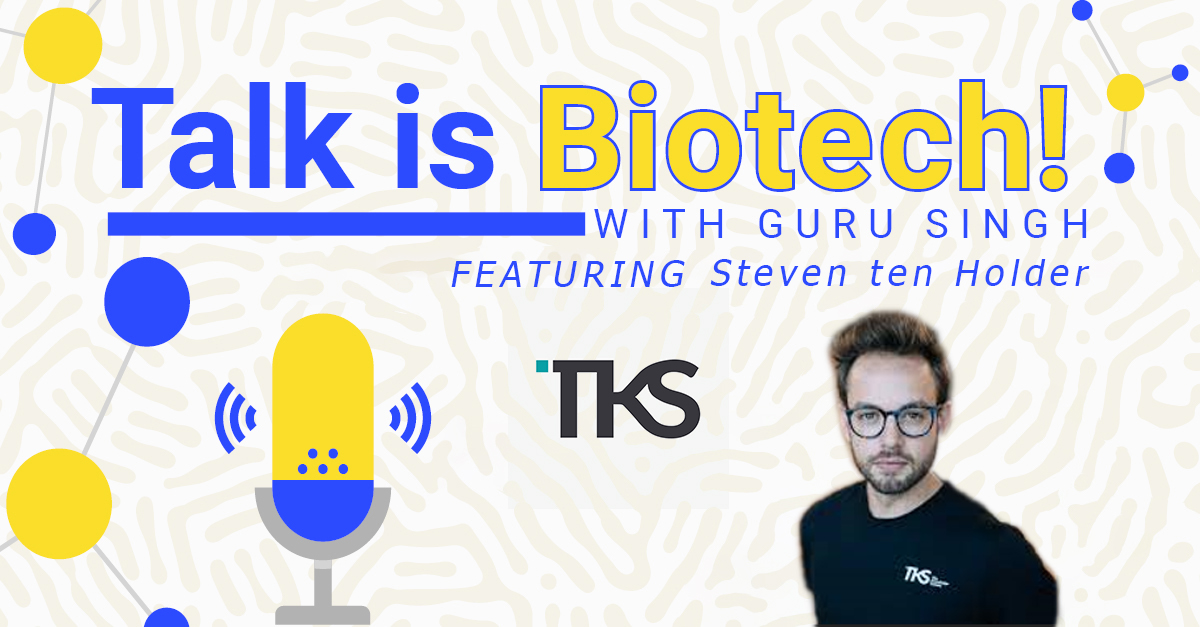 In this episode of Talk is Biotech! Guru Singh, our CEO, talks to Steven Ten Holder, Director at The Knowledge Society (TKS) & Co-Founder at Acorn Biolabs about the potential to increase the human lifespan to 800 years, how cells preserved at a young age can help you grow older, and much more.

Acorn Biolabs is on a mission to extend your lifespan

Acorn Biolabs was founded to help people prepare for future cell treatments with autologous live-cell cryopreservation. If you're an Acorn customer, you've banked some of your own cells and are paying $15 a month to keep them safe. Acorn and their clients are enthusiastically cheering on the rest of the regenerative medicine community, as they do their work because everyone benefits from this research.

Part of the speculation is that in the next 20 to 50 years, more scientists and bioengineers will have discovered new ways to use cells to perform things that could potentially prolong your longevity or improve your overall health.

Once you have enough people that are invested in it, this could change funding policies, create funding incentives, and direct research towards longevity research. The larger goal is to create an ecosystem where they can support scientists by providing protocols and kits that they can utilize themselves.

‍What do you do with your preserved cells when you grow old?

There are many ways you can take advantage of the cells that you stored when you were younger. The key is to communicate the most relevant ones in a simplified manner so people can better understand the techniques involved. The most relevant ones are 3D printing and T cell therapeutics.

The goal is to replace old cells with new cells which can be used to treat diseases and help in extending life. For example, if your liver is failing at 80, you can use your preserved cells to 3D print a replacement liver. If you need to undergo CAR-T cell therapy, the immune cells of an 80-year-old are not going to give an effective output. This is where you can use the cells you preserved when you were younger for the same CAR-T cell therapy and get much better results.

If you replace all the old cells with the new cells in your entire body, will you still have the same consciousness?

We've all heard the Theseus’ paradox, which asks if an object that has had all of its components replaced is still the same object. Similarly, if we replace every cell in the human body, will we be the same person? Steven believes the answer to that question is yes when extrapolating the paradox to humans because we already are very different from who we were when we were babies. He also shares a book with us called Replacing Aging by Jean Hébert.  His thesis argues that we should be replacing old macromolecules, DNA mutations, and protein aggregates with younger cells instead of repairing them.

The cells in our brain are harder to replace than the ones in other parts of our body, but some scientists are making progress in this area by thinking about how to slowly replace your older cells with younger cells.

Would living for hundreds of years become boring?

Guru and Steven theorize about how people could keep themselves entertained if they had an 800 year lifespan.

Guru suggests that some people might try to create new versions of themselves similar to how Apple makes new models of iPhones to keep things fresh, exciting, and up to date.  Steven thinks this could also be done in combination with self-induced amnesia every one to two hundred years so that people could reexperience naivety and ignorance. These desires wouldn’t apply to everyone, as some people like Steven would want to make the most of 800 years of living. He would continue to explore chemistry and physics after exhausting his interest in Biology. Perhaps we could even explore the human consciousness in a way that could only be possible with an extremely prolonged life.

How do we unlock the potential of our intelligence?

Intellect is one of humankind’s defining traits, but there are limits to what our minds can do. Exceeding those limits and increasing human intelligence is a challenge that can be approached in several ways, such as reconfiguring the human or using implantable brain-machine interfaces like Neuralink.

The inequality when it comes to living for 800 years

The cost-prohibitive nature of this technology leads to inequality and ethical dilemmas. Only the top 1% of the rich currently have the resources to make it available to them, but Steven assures us that it’s going to follow the price trajectory of an iPhone or Tesla.

When the iPhone originally came out, it was a brand new technology that sold for about $600 to $700. However, today's iPhone SE costs around $400. With the model S and now the model 3, Tesla is slowly attempting to improve how accessible it is to the general public. The developed core technologies don't necessarily have to be inherently expensive themselves. It will likely be the kind of thing that economies of scale will take over as the product itself scales.

Scispot is on a mission to empower bioentrepreneurs and make workflow automation possible for every life science lab on this planet. To learn more about Scispot and its no-code digital toolkit for lab digitalization and automation, book a demo here.